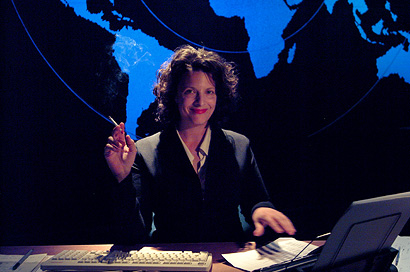 The public interface of the INS Broadcasting Unit at the ICA, 2004

I was born in the USA, brought up in Bangkok and Norwich, and am now based in London.

After studying computer science at Manchester University, I changed direction and graduated with a degree in Interior Architecture. Manchester was home to a thriving community of radical performance makers in the late 1980s; through them and companies like Impact theatre, Forced Entertainment and Dogs in Honey, I found my vocation. In 1990 I moved to London to study at the Motley Theatre Design Course.

My heart still lies in avant-garde theatre, but most kinds of live performance give me a thrill. I have collaborated on many experimental and devised productions for non-theatre spaces as well as venues as diverse as the ICA, the Barbican and Tate Britain. I have also designed Shakespeare productions for the Globe and the Royal Shakespeare Company; classic drama at the National Theatre; new writing at the Royal Court; a handful of musicals, big and small; dance pieces at Sadler’s Wells and the Vienna Volksoper, and sets for English National Opera, Welsh National Opera, Opera North, New Zealand Opera and Houston Grand Opera.

I’m an associate artist with two innovative companies – Imitating the Dog and Duckie – and am the Environmental Engineer for Tom McCarthy’s International Necronautical Society.

This website is designed by the brilliant Miriam Elia.